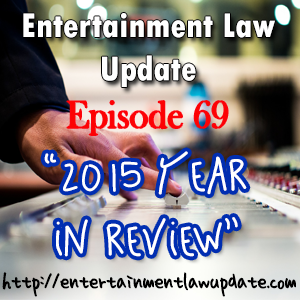 In October , as we reported in Episode 67 of the show… the 2nd Circuit Court of Appeals ruled that rights to “Santa Claus is Coming to Town,” the all-time most performed holiday song, will revert to the heirs of J. Fred Coots.

THIS CASE SETTLED LAST WEEK:  A settlement was reached last week in the class action claim that the lyrics to “Happy Birtday to you” are in the public domain.

Then in Episode 65, we reported that the judge had ruled against the defendants’ motion for a new trial, but had trimmed the judgment down to about 5.3 Million Dollars…

and, just last week it was announced that The song’s writers, Robin Thicke, Pharrell Williams and T.I., have filed an appeal

On February 26, 2014, the United States Court of Appeals for the Ninth Circuit ordered YouTube to remove the video from its website by a 2-1 majority. The ruling was in response to a complaint by actress Cindy Lee Garcia, who had objected to the use of her performance, which had been partially dubbed for its inclusion in Innocence of Muslims.

Garcia had believed during production that she was appearing in a film called Desert Warrior, which was described as a “historical Arabian Desert adventure film”, and was unaware that anti-Islamic material would be added at the post-production stage. Garcia had argued that she held a copyright interest in her performance.  the lower court disagreed, but the 9th initially held that she could have such an interest, and ordered youtubr/google to takedown the film.

then, In May of this year…, in an en banc opinion, the Ninth Circuit reversed the panel’s decision, vacating the order for the preliminary injunction…

Entertainment Law Update is brought to you, in part by the good folks at Clio, the best cloud-based practice management solution. Click the logo below to receive a free trial, and 25% discount on your first 6 months’ service.

This settlement was contested later in the year, covered in Episode 65, July 2015.

Pandora will pay $90 million to the Recording Industry Association of America.

From Episode 68: The second circuit has ruled that “Point Break” parody is entitled to copyright protection

http://www.chicagotribune.com/news/weird/ct-monkey-selfie-copyright-20151111-story.html– (Gender of the photographed monkey being disputed)

Listen to our latest episodes