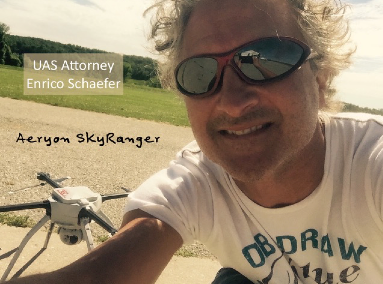 Enrico Schaefer, Esq. is a Unmanneed Aerial Systems pilot and technology lawyer at TraverseLegal in Traverse City, Michigan.  He has been a UAS enthusiast for years, and has completed a number of advanced UAS classes in the UAS program at Northwestern Michigan College.  Enrico is considered one of the top Section 333 and UAV attorneys in the country, representing Fortune 100 and start-up companies on drone law and Section 333 issues.  He is the author of many articles concerning FAA drone regulations, Section 333 exemptions and FAA compliance, many of which can be found here at DroneLaw.pro.  Enrico has been a speaker at the International Drone Conference on its insurance panel and has had numerous media appearances ranging from MITech News, Robotics Business Review,  Internet Advisor Podcast and The Steve Gruber Show (1240 WJIM Radio), WJR Radio (Detroit), DroneLife.com and “That Drone Show.”

N.B.- The checklist doesn’t cover everything, but is a good place to start. Please review all FAA rules and regulations on commercial operation for drones:

Drone rules: Everything you need to know to fly domestic drones legally – The Independent

Tamera Bennett interviewed on Prince estate and right of publicity

Prince died with no will – an interesting wrinkle